josephmckeown Moderator, Lightspeed Staff Posts: 81 moderator
June 2018 edited October 2020 in Reporting & Analytics
*Note, from this part of the Discussions, we will assume that you're comfortable with starting Calculations. Changing dimensions and measures, changing filters, and some of the basic starter calculations: addition, subtraction, division, multiplication, greater than, less than, equal to, single-criteria IF functions, and multiple criteria IF functions.

If you're in the early stages of your Analytics mastery, you may want to take a quick look at the related Discussions:
Multiplying by percentages in Analytics
Analytics provides lots of functions that perform different mathematical, logical, and table-based calculations. You can find a more in-depth catalogue of available functions on the Looker list of functions and operators.

To make it easier, we could categorize these in five different ways: Cell functions, Date functions, Logic Functions, Math functions, and Table functions.

In this article, we'll be looking at ten of the Math based functions:
Large, Max, Mean/Median/Mode, Min, Round, Runningtotal, Small, Sum,

Returns the nth largest value from a range, where "n" is freely defined. Requires two arguments, the range, and which largest number.

For example, if I want to find my highest daily sales total, I could build...

My calculation is
large(${sale_lines.total_sales_no_tax},1)
and if I have saved it properly...

Now, because I prepared my calculation to always look for the 1st largest value, I get the same value in every row. (in the above demonstration, $21,050.72)

In this instance, my calculation would look like:
large(${sale_lines.total_sales_no_tax},(row()))
and when I save:

Returns the corresponding measure of average value from a range: 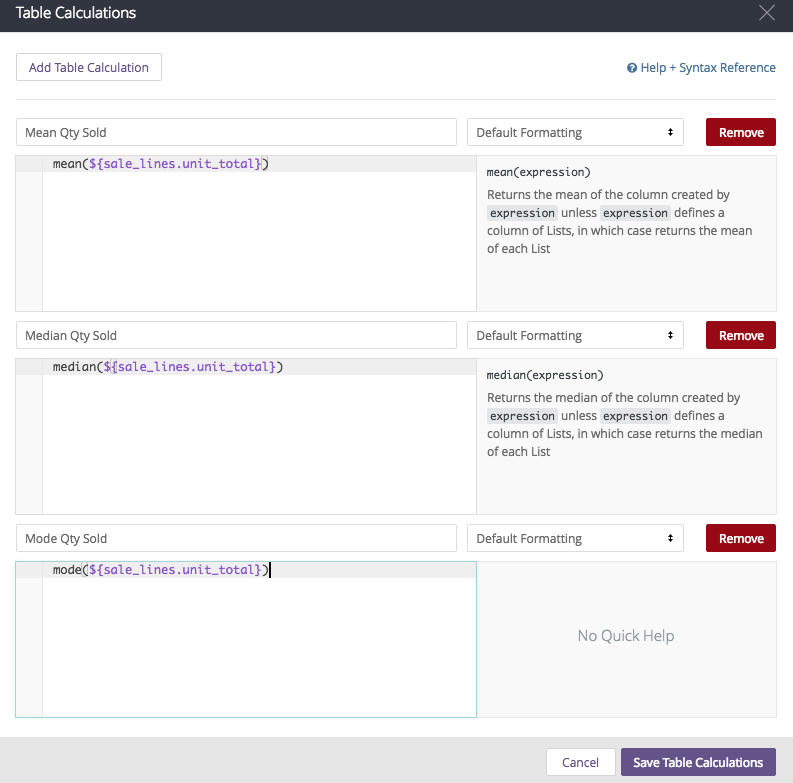 In this instance, I am finding the mean, median and mode of the number of items sold on a sale last week

Rounds a number up or down to defined number of decimal places.

Say I wanted to look at my total sales for the past six weeks, and determine what the average weekly qty sold is.

The "Round" function needs two arguments, the first argument is which number is being rounded, the second argument is how many decimal places we want to round to: 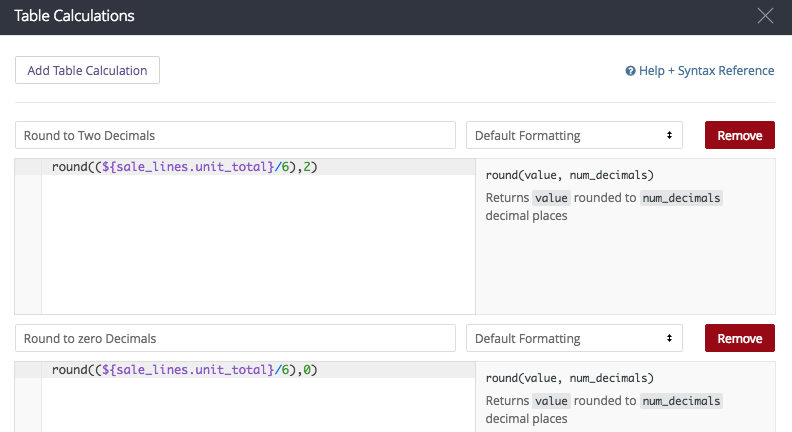 So, in this example, the number we want to round is the six-week weekly average: (${sale_lines.unit_total}/6), and the number of decimals is 2 in the first cell, 0 in the second.

Used to add all values in sequence, for example, if I want to see what my year-to-date totals are per day,

running_total(${sale_lines.total_sales_no_tax})
and if I have saved my calculation properly:

Opposite of "Large", returns the nth smallest value from a range where "n" is freely defined. Requires two arguments, which field to look at, and which smallest number...

For example, if I want to see what my lowest daily sales were...

small(${sale_lines.total_sales_no_tax},1)
and if I have saved my calculation properly:

Returns the total value of a visible range, does not include values not displayed on the table. Requires one argument, which range is being summed.

If I want to return the sum of total sales, for example...

sum(${sale_lines.total_sales_no_tax})
and if I have saved it properly...